Apart from Udaipur, another city of the southern suburb of India is known as the 'City of Lakes' which is Thane, a city in Maharashtra. Previously known as 'Thana', it's name was changed to Thane. Spread in a space of 147 sq km, it has a population of around 2 million people which goes beyond its municipal limits.Thane is also the third most industrialized district in Maharashtra. A part of the Mumbai Metropolitan Region,  Thane has become almost a part of Mumbai due to its proximity.Thane not only shares its island with Mumbai but also Salsette island. The famous hills, Hill of Yeoor and Parsik Hill surround this city which is elevated 7 meter above the sea level.

The city of Lakes reference has been derived due to the factor that the city features 35 lakes of which some are as follows: 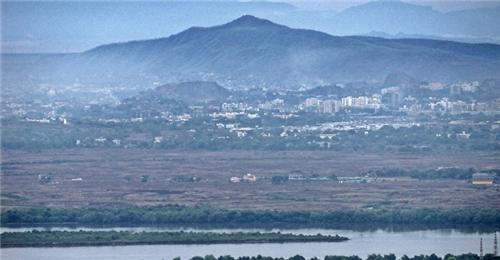 The 2 main rivers Ulhas and Vaitarna pass through this district and has many tributaries too.

These lakes add to the scenic beauty as many of them are located at the foothills of Yeoor and Parsik lake.The climate adds to the perfection with hardly any extremities but Thane is home to heavy rainfall.Thane is also home to many communities from Agri, Kohli and Wadavli which gives rise to variety in culture but Mahrashtrian culture prevails mostly thus making it a destination place for many temples like Ambarnath Temple, Shri Shani Mandir,Vajreshwari Temple etc. This also gives rise to festivals and fairs throughout the year.

Thane is famously known as the terminus for the first ever passenger train in India which was inaugurated between Chatrapati Shivaji Terminus and Thane. Thane is well connected to the neighboring suburbs through the Central and Trans- Harbor Suburban Rail network.Thane has a good network of roads for transportation purpose but it does not have a private Airport. The only airport close to it is in Mumbai which is 24 km away.

The close proximity of Thane to Mumbai has given it a cosmopolitan outlook though maintaining the ancient aspects. Thane has a mix of old screen talkies to multiplexes and also the largest malls in India. Some of the old and well known theatres are Anand Talkies, Ganesh Talkies, Malhar Talkies and Vandana Talkies, while some of the multuplexes like Cinepolis, Cinema Star, Inox are situated in malls like Big Mall, Eternity Mall, Hypercity Mall etc. The inclination towards the entertainment hub makes Thane also possess auditoriums which are owned by Thane Municipal Corporation.

This city is well equipped with 5 star hotels and many upscale eateries and various restaurants lined up at the tourist spots. Even facilities for sports and leisure activities like Swimming, gymnasium and basketball and Dadoji Kondevv Sports Stadium being one of the most significant stadium in this district.

With the event of modernization, Thane has now become one city with popular tourist destinations, heritage places, religious spots and a hub to various large scale and smale industries. Even the popularity it has gained with its food chains, upscale eateries and resorts, Thane is looked forward to become another metropolitan like Mumbai.

Thane is a developing city but what it has not compromised with is the development of its society and the welfare programs. Thane has covered the society's development and maintenance in the following fields with:-

Thane also has welfare society for animals wherein providing shelter homes, medication for stray animals and distressed animals are taken care of. Organizations like Paws, Karuna, SPCA and Pet Care take in charge of the welfare of animals. These organizations are mostly funded and work through trusts or on volunteer basis.

Many trusts and welfare societies also organize free medical checkups, free hospitality and medical services for the people below the poverty level.

Free education, free stationary and workshops are also organized for the underprivileged children to help find them proper education and ways to learn. Some of the organizations regarding children welfare are Udaan, Adhar, Shining Angels etc.

Thane also has women care institutions and even workshops for the betterment of Women. Options and ways of earning  income are proposed which are profitable to the underprivileged women. Gurukulkailash, Shanti Hastkala, Mission Swayam Siddha are some of the NGO's which work towards the betterment of women welfare.